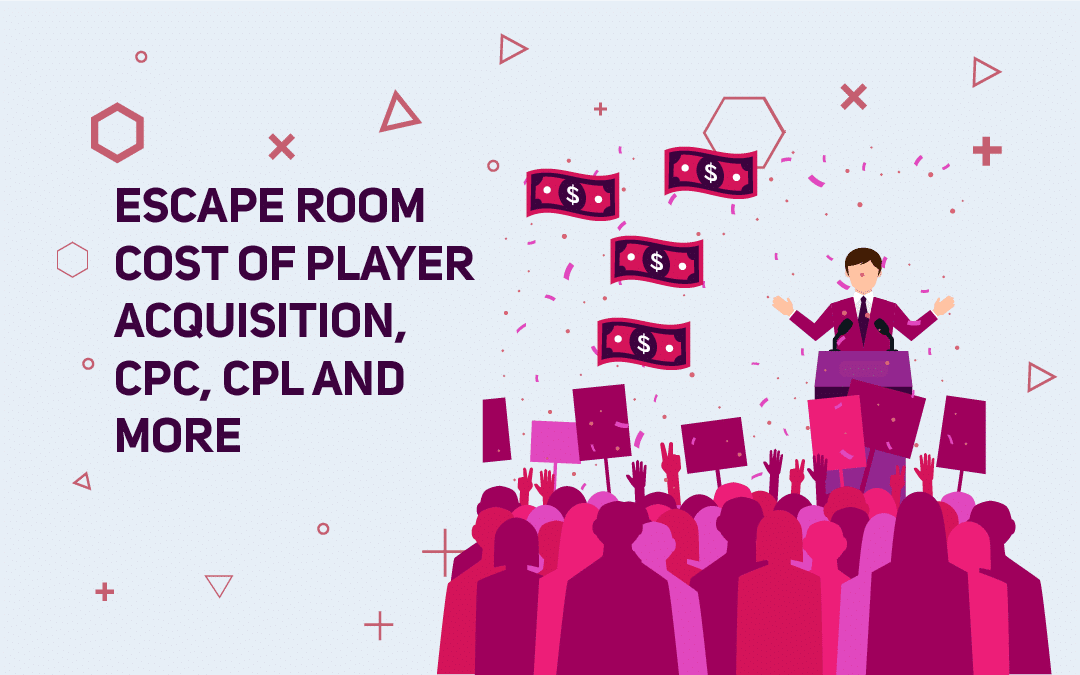 Take the guesswork out of business decisions like how much to invest in acquiring new leads for your escape room.

Should you spend as much as you can on acquiring new players for your escape room?

Can we take the guesswork out of deciding how much to pay for paid ads, what cost per click to set, what to invest in acquiring team building leads and so on?

And this blog will show you how…

We’ll begin from a basic cash flow model – revenue going in, working expenses going out, profits retained and investments made.

Then we’ll adapt it to the escape room business structure, plugging in items from your balance sheet into the model.

Finally, we’ll take up the math – how you can estimate all the things like what’s the most you can afford to spend on acquiring new players, what should be your cost per click and so on.

The basic cash flow model of a business

In a business, you’ll have…

That’s the basic cash flow in a business.

In other words, if you are presently spending a thousand dollars on marketing, then you should be clear that

This $1000 will bring you the bookings you need to turn a healthy profit that you can re-invest into your marketing.

You are not spending $1000 to achieve your target, where it could have easily been achieved for $500.

Let’s elaborate on that…

Now, there are various ways you could build on this but the easiest way to go about it is to understand the basic ways cash enters and leaves your business.

How does cash enter your business?

When you get a new booking in your business.

That’s the value addition you can expect from a player during the entirety of their relationship with you.

For example, say you have two rooms and the price is $30 pp.

Then, Alan booked 4 tickets for the second room and had such a good time that he also bought a 4-player gift card for his friend Herb.

Since most players don’t book the same room twice, Alan’s relationship with you can be presumed to have ended.

From this value addition, you need to deduct your costs.

The first cost you need to deduct is the cost of providing the Escape Room experience to Alan.

The second cost would be the overheads – rent, utilities, payroll and so on.

Once those are deducted, you know how much of Alan’s LTV you have left to retain as profit and/or to spend on acquiring new players.

Now you need to decide how much of Alan’s LTV  you want to retain as profit.

With that out of the way, you are left with the amount of money that is available for spending on acquiring new ‘Alans’ (read players), which is your tolerable player acquisition cost.

Is that how I’ll have to do it in practice?

Everyone will have their own booking patterns.

Some players may not play all your missions, some players might even purchase Gift Cards for their friends and family.

But your costs for giving the experience and overheads will remain unchanged.

In practice, what I just discussed above will be accomplished by averaging across all your bookings and the data will be obtained from your business statistics (preferably over a year-long period or a 90-day period depending on how much business data you’ve got) and you will work with that.

How many bookings did you acquire over a period of time?

You can go back as much as you want, but we recommend the last 12 months. If that data’s not available, you should work with whatever you have. You can work with as little as the last 90 days’ data.

What is the total revenue generated by those bookings?

Step 2 – Cost of Cancellations and Refunds

One thing I didn’t refer to while discussing the example of Alan is cancellations. Most Escape Rooms allow cancellations, some in lieu of a fee. And inevitably there will be some refund requests as well.

Since the overall bookings will include cancellations, we need to eliminate those.

Anywhere from 1% – 5% is a fair assumption of the cancellation rate for an Escape Room.

Supposing that you have a 5% refund and cancellation rate, let’s deduct that from your PLTV.

The only cost incurred in providing an Escape Room experience to players would be the time you spend on running the Escape Room for them.

The challenge here is to place a dollar value on that time of yours that you spent on providing them the experience.

These are distinct from the cost of providing the Escape Room experience, though at first glance they may seem to be the same.

These include payroll costs, utility bills, maintenance expenses, license costs (if you’re using anything proprietary), legal expenses, software and accounting expenses and so on.

Since these are annualized figures, we calculate them as a percentage of total revenue to figure out what portion of the PLTV goes towards meeting these expenses.

You don’t need to be exact here, getting a ballpark figure of these overheads can help you calculate the % share they take away from your yearly revenue.

For Example: If we assume our overhead costs to be 30% of our yearly revenue then we can take that away from the PLTV.

Now, before we proceed, the first thing that we need to do is subtract the aforementioned costs from the PLTV to get the Net PLTV.

Part of this $64.35 is taken as profit and the rest is invested in getting new players through the door.

Let’s assume you choose a relatively conservative profit margin of 20%.

Depending on your market you can choose a convervative or really agressive profit margin, but bear in mind the higher the margin, the lesser you will have to acquire new players. This is your choice.

In other words, $40.95 is your Tolerable Player Acquisition Cost [TPAC].

Why? Because this will decide the power of your escape room marketing campaign.

But if you opt for a conservative profit margin of 30% then you are left with $35.1 as profit and $29.25 to acquire new customers.

Now, this decision is yours to make, depending on your market and business opportunity you can stick with whatever profit margin you feel is best for your business.

Now that you have the Tolerable Player Acquisition Cost, what’s next?

How do you use this new-found knowledge to figure out other important metrics for your business?

What is a viable cost per team building lead for your escape room?

Let’s dive straight into this.

Figuring out the metrics

To understand the Cost Per Team Building Lead for your Escape Room, you need to look back at your past sales or ask your sales team to tell you the percentage of leads that convert into paying customers of your business.

If your sales team converts leads at 10%, you know that for every 10 leads you will get one paying customer.

This can be a good KPI for your Cost Per Action Marketing Campaigns, where the objective is to get form submissions or generate enquiries about Team Building opportunities at your Escape Room.

The best way to understand what a viable CPC will be for you escape room is to firstly understand the conversion rate of your website.

To get this, you can either ask your website administrator to pull the Unique Visitor Data from your Google Analytics over the last 12 months (or whatever period you are working with) and divide that by the number of bookings that were generated within this period.

Therefore, your conversion ratio would be,

This data will allow you to make informed business decisions and scale up your marketing campaigns that are profitable.

So any marketing campaign that generates a CPC of over $2.3 can be marked down, while campaigns that have lower CPC can be increased in budget.

We have created a handy spreadsheet that will help you calculate the Tolerable Player Acquisition Cost for your Escape Room. Be sure to create a copy in your Google Drive before using it to prevent losing your changes.

Do you find our process to calculate the ‘Tolerable Player Acquisition Cost’ helpful?

Is this something you would share with your fellow Escape Room owners?

Feel free to share your thoughts in the comments below!