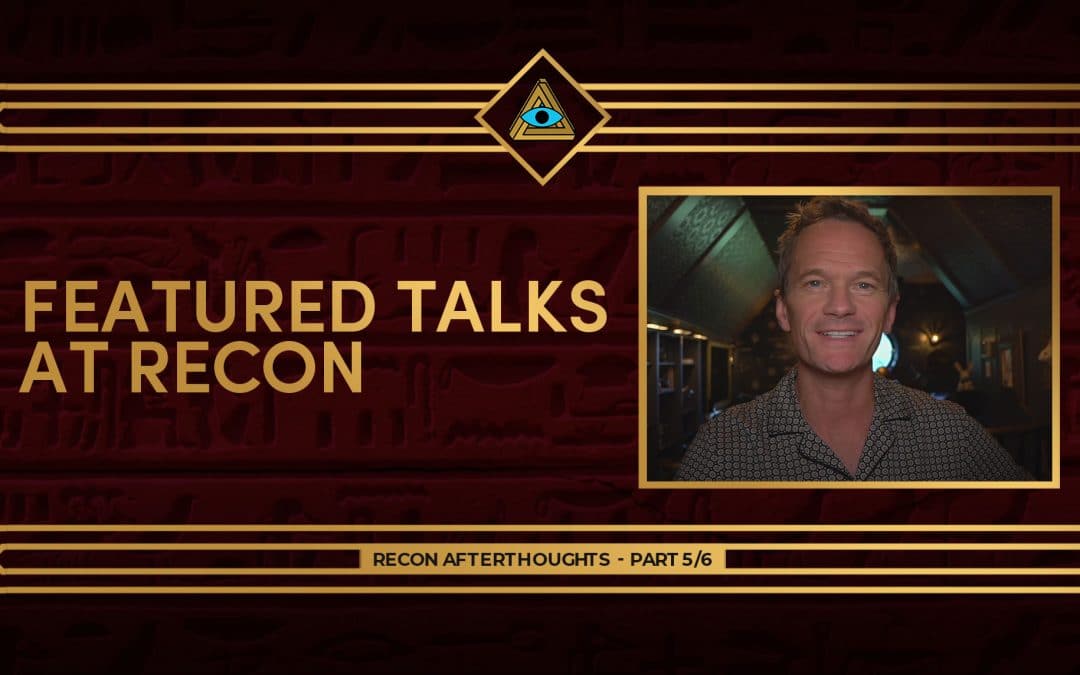 PART 2 – The awesome people behind RECON ’21

Well, then, you’d be in for a treat at RECON!

As we shall see, the featured talks at RECON were all on specific and relevant industry topics, like…

Innovating with the game structure, how to leverage game-mastering to improve the players’ experience, and so on.

They were delivered by people with stakes in the game – owners, designers, and so on – as opposed to self-appointed “gurus”…

Which is why they were energetic, engaging and extremely enjoyable.

Both the workshops and the talks focused on specific escape room/immersive experience topics.

Both were delivered by people involved in the sector.

The workshops were very two-way, with participants getting hands-on with tasks and interacting directly with the hosts, while

The talks saw the hosts present their talk, and then take questions from the audience.

The flip side of it was that each talk was open to everyone (unlike the workshops in which a maximum of 20-25 people could take part).

How did the talks proceed?

Ten to fifteen minutes before each talk, RECON volunteers would alert the host that their turn was coming.

Kudos to the volunteers for being on their toes throughout….

Then, focus shifted to the main stage.

First up would be an intro by Harrison Greenbaum (we’ll come to him in a minute), followed by the actual talk

As you can see, there’s a window for people to ask questions.

Once the talk ended, Peih-Gee Law took over, hosting a Q&A with the speaker.

Finally, every talk had its own channel on the RECON server.

Can we access the talks, now that RECON ‘21 is over?

Videos of the livestreams will be uploaded on Room Escape Artist’s YouTube channel.

Subscribe to their channel, and you’ll be notified when the videos are live!

The hosts and special guests

I told you there’s a reason I started this blog with a HIMYM reference!

As it turns out, apart from being a top-notch actor, Neil’s a passionate fan of puzzles and immersive entertainment.

Oh, and he’s also extraordinarily gifted at creating puzzles. For a taste of his prowess at crafting puzzles, you can check out his creation!

David is a product manager and experience designer, while Lisa works as Head of Content Intelligence at Persado, and also as a private baby name consultant.

They founded Room Escape Artist in 2014, and grew it into perhaps the best known reviewer of escape rooms.

They share a passion for puzzles, and want to inspire puzzle makers to create awesome experiences.

Co-host of the Reality Escape Podcast, and live Q&A host

Peih-Gee Law is a private jeweler and no stranger to organizing and hosting trade shows and corporate events.

She was a contestant on Survivor China in 2007, and returned for the All Star season Survivor Second Chance.

Peih-Gee loves being an ambassador for the escape room and immersive entertainment industry.

America’s Got Talent, Last Comic Standing, This Week at the Comedy Cellar – these are just some of the shows Harrison’s been featured in.

He’s a star on The Illusionists: Direct from Broadway, the biggest-selling magic show in history.

If you’re in New York, you should definitely check out SCAM New York, a first-of-its-kind immersive magic show.

He’s played a lot of escape rooms, is a huge fan of the industry and was the only person on the list of MC candidates.

Now that we’ve met the hosts and special guests, let’s proceed to the talks themselves!

The Promise & Possibilities of Escape Rooms

Presented by: David and Lisa Spira from Room Escape Artist.

What separates an awesome room from a “meh” one?

Can an average escape game be improved?

They also talked about where the industry is headed, and on how they can shape human interaction in the years to come.

One key topic they mentioned was how the name “escape room” is a little off-putting to many people, but we’re probably going to have to work with that.

Given the Spiras’ extensive experience in the industry, this was one of the most sought-after talks at RECON ‘21.

Overall, a broad-based talk and a must-listen for anyone interested in the industry.

Presented by: Tasha Tarkhanova from Project Avatar and Legendary Quests.

Tasha’s an escape game creator and owner from Ukraine.

When the pandemic shut down, she and her team created Project Avatar, a unique experience that has since won multiple awards.

The Project Avatar team created a magical experience working out of an abandoned factory. Embedding Augmented Reality into a Live-stream Game is probably the first of its kind (at-least as far as I know).

What went into the making of Project Avatar?

How did they come up with the idea, and how did they plan the execution?

What challenges did they face?

She made it sound so easy – developing a project like Project Avatar!

Apparently, she taught herself how to program Arduinos and work with sensors because she was bored on a military deployment to the Middle East!

Can you build your own escape room riddles and tasks!

With a little self-belief, a little dedication, and a lot of inspiration from this talk class.

The way she played around with Arduino, mag-locks, and sensors, it was awesome.

If you’re not interested in working on projects involving circuit boards and microcontrollers, watch this talk when the recording is uploaded on the Room Escape Artist YouTube channel.

You may well have developed a new hobby by the time you’re done!

A trio of escape room lovers and chroniclers (Margritte through her talk show Crack The Game, Ken through his blog The Logic Escapes Me and Jackie through her Facebook page Exit Games Scotland).

You’re talking escape rooms with someone who’s never heard of them.

Ten to one, their first question is, “why should I pay someone to lock me inside a room?”.

The more you try to explain it to them, the more they seem to stick to their question, and the more both of you get frustrated.

That is the issue tackled by Margritte, Ken and Jackie in this talk.

How can you best introduce a newbie to the escape experience?

And how, if they decide to make a booking with you on their team, can you be the teammate they need to fully appreciate the experience?

If you’re interested in introducing others to the wonder world of escape rooms, I highly suggest you watch this talk when it’s uploaded on the Room Escape Artist YouTube channel.

Yan is the driving force behind Archimedes Inspiration, an escape room in London that adapts narratives and concepts popular in Chinese escape rooms, in its games.

They range from the smaller ones with more simple games to high-end ones with multiple actors and costumes for players.

Yan talked at length about where escape rooms fit in Chinese culture, how they became so popular, and where the industry is at now.

First of all, I must say it was refreshing to attend a talk involving China that focused on a positive experience.

It was delightful to hear about how popular escape rooms are in China (they have over 2000 escape rooms!), the cultural perspective of escape rooms in China, and how extensive their high-end experiences can be!

Presented by: Errol Elumir from The Codex.

Errol is a puzzle creator, the author of 13 Rules For Escape Room Puzzle Design, organizer of a global (online) ‘cryptex hunt”, board memeber of the Top Escape Rooms Project, a co-host of the Escape Room Divas podcast and a blogger.

Did you notice that I mis-spelt the word “member” above?

How can you design a puzzle that’s a great fit for an escape room experience?

How can you ensure the puzzle leaves players beaming in joy, not fuming in frustration?

How do you consolidate myriad ideas and options into a workable puzzle idea?

That was the focus of the talk by Errol.

I know the title says “five things…” but this talk was more of a “puzzle design 101” class, delivered in Errol’s unique style!

After the one by David and Lisa, Errol’s talk was my personal favorite at RECON ‘21.

Errol has a unique ability to make you laugh while talking about complex concepts…which makes this talk one to look forward to, on the Room Escape Artists YouTube channel.

And I personally believe that ‘Errol Elumir’ is actually a pair of twins masquerading as one person because there is no way a single guy could be active all over discord like he was.

Getting Started in Building Immersive Environments

Presented by: Marise Watson & David Vella from The Cipher Room.

Marise used to be a website designer, writer and reviewer of games, gadgets and films.

David used to be a veterinarian, guitarist, public speaker, gardener and a lot more.

They set up The Cipher Room, their independent escape room brand that creates its own games (from concepts and narratives, to puzzles and sound and special effects).

How can you bring your escape game narrative to life?

Specifically, how can you design the set to reflect the narrative, fit the puzzles and wow players?

And how can you stick to a budget?

That was the focus of their talk.

Set design talks (and blogs) are a dime a dozen.

But most of them lack the perspective that this one had – how to create a set that reflects your story and narrative.

Add to that the pointers on remaining within the budget, how to lower costs by minimizing dependence on tradespeople – and you’ve got a talk that’s worth listening to!

Presented by: Bill Sunderland & Dani Siller, the hosts of Escape This Podcast and Consume This Media.

They also love creating audio escape games and inviting guests to play them, live on air!

This was a live (online) escape room event!

How did it work?

Well, you may have guessed that it wasn’t just everyone doing whatever they wanted – that would have led to CHAOS!